Get a free evaluation of your pest control issues from an expert in Grand Rapids right now!

Despite what some people may think bed bugs aren’t caused because of dirty or filthy conditions. They are also not some remnant from a plague centuries ago. They exist for one one reason – to survive off of the blood of humans.

If you want to understand bed bugs you must first understand that their only source of food is blood. Bed bugs that are most often found in homes need human blood to both live and to breed. Unlike other bugs, bed bugs don’t have the ability to leap or to fly so in order to get to their food source they find ways to attach themselves to humans and our belongings in order to be transported.

Bed bugs seek out places where humans nap or sleep. They are typically nocturnal creatures, active at night when humans are asleep. Most experts agree that bed bugs are able to sense body heat and the carbon dioxide we emit when we breath. Once a human host is asleep, they then crawl onto skin and feast themselves on our blood.

Why are bed bugs in the news all the time?

During the 1950s we nearly eliminated bed bugs because of the pesticide DDT. However, in the early 1970s DDT was banned because of dangers it presents to wildlife, humans, and the environment. The bed bugs that did survive became resistant to DDT and other pesticides and have become “super bed bugs” by continuing to live and breed. Each female bed bug is capable of laying between three and five eggs per day resulting in up to hundreds in her lifetime. Bed bugs resistance to pesticides as well as the increase in global travel, populations growth and urban living conditions has led to a resurgence of bed bugs in the United States

Do bed bugs live on people?

Typically the only time that bed bugs are on humans is when they are feeding and we are sleeping. However, bed bugs do rely on humans to travel as they don’t have wings or specialized legs for jumping. So bed bugs will typically crawl into our belongings for transport. Items such as luggage, purses, backpacks, cars, toys, etc are all common ways for bed bugs to travel.

How far can bed bugs travel?

How far can humans travel? Global travel has decreased over the last several decades. Decreased travel costs, an increased population, and an increase in access to travel has all helped to contribute to the spread of bed bugs. Bed bugs are able to simply hitchhike a ride on personal items and move to places like planes, cruise ships, cars, and people. If you are someone who travels frequently it would be wise to learn how to spot bed bugs in your hotel room.

Are bed bugs more prevalent in cities or rural areas?

Unlike humans, bed bugs don’t have a preference when it comes to city living or country living. They are able to find a way to call home wherever humans are. However, just like travel, in the last several decades urbanized living has increased causing humans to move closer together in cities. This has also contributed to an increase in bed bugs as they closer we are in proximity to one another the easier it is for bed bugs to spread.

Do bed bugs only bite in beds?

Given their common name and scientific name—Cimex (bug) lectularius (bed), you may assume that you are only susceptible to being bitten by these insects as you lay in bed. However, bed bugs don’t care if you sleep on a mattress or in a recliner or couch. Once they have made their way a place where humans sleep they will lie in wait during the day and come out at night to feed on human blood.

Can you give an example of how a bed bug might travel?

A salesman comes to your home to talk to you about a product you are considering purchasing. The salesman places his briefcase on the floor. The bed bug crawls out of the bag and scurries into a crevice in the couch in your home. As long as there are humans around, bed bugs will find their way to where humans sleep. You may not even be aware until you notice the first bed bug bite.

Should I purchase used furniture?

Brand new furniture can be extremely expensive and purchasing used furniture may be enticing at times. However, before you make that purchase you should consider what else may come home with you besides that couch. Deep inside the folds and crevices could contain bed bugs or bed bug eggs which may not always be observable to the untrained eye. You should thoroughly inspecting used furniture before bringing it into your home.

Climate typically does not impact bed bugs or bed bug behavior. Because they live on humans and we keep temperatures indoors at optimal settings for us they also adapt to this. Bed bugs are very hardy creatures and only severe frigid temperatures (think below zero for a week!) may kill them

Will everyone eventually get bed bugs?

It may be helpful to think of bed bugs like germs or a virus. While some people may be carriers of a disease and carry it around and pass it on to others some people become immune and are not impacted. So while you may be exposed to bed bugs you may not be impacted. However you can help reduce the spread of bed bugs with awareness, education, and communication.

How should I deal with bed bugs?

If you do suspect a bed bug infestation it is advisable to have it treated immediately by a pest control professional. 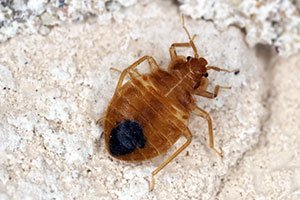 Get rid of "unwanted guests" in your home!